Bridges to Prosperity currently operates field programs in Bolivia, Rwanda, Uganda, and is currently in its first year of a scaling initiative in Rwanda, which will see the completion of more than 300 footbridges over a five-year period, creating new safe access for more than a million people.

Independent studies have demonstrated that B2P footbridges increase labor income by an average of 35.8%, farm profits by 75%, and the participation of women in the wage labor force by 60%, and that the annual return on investment at a community level is 20%. B2P believes that footbridges are a powerful and cost-effective tool for addressing poverty at scale.

The database is stored as PostgreSQL in AWS RDS (Amazon Relational Database Service). We use pgAdmin to manage the PostgreSQL database stored in AWS RDS. FastAPI framework is used as data science API to connect to database and provide a route for live prediction on target. The FastAPI app is deployed onto AWS Elastic Beanstalk and interfaces with Web Frontend. Installed packages in the project are managed with docker container.

Next we will use “bridge_opportunity_stage” and “senior_engineering_review_conducted” columns to create a new feature “good_site” representing the sites that are rejected or approved or not labeled:

Many of the features in the dataset are not directly related to identifying the sites that would technically be a approved for construction. We could have used feature permutation or feature importances to identify the more relevant features. However, since the features are very descriptive and relatively easy to interpret we select six features, which are most relevant for our modeling purpose.

Before we create any model let’s define the input and target column, as following:

Some of the selected features are categorical. We will use One hot encoder to convert them to numbers.

Missing values in numerical features are filled with the mean value of each feature. This would prevent the FastAPI to arbitrary fills them with 0.

We need to process the input data in multiple steps. First using an encoder to convert the categorical data into numerical values. Then We’ll apply SimpleImputer to fill the nan values based on the selected strategy. Next we’ll apply StandardScaler to normalize our numerical data. After standardizing our data we use SMOTE to synthetically generate data as a remedy to our imbalanced dataset. Finally we’ll use LabelSpreading to label the majority of the data that is unlabeled. Label propagation is a semi supervised technique that uses labeled data in the training set to define the proximity and then the algorithm attempts to label the rest of the data that are unlabeled. It’s also possible to give the algorithm a degree of freedom so that it can relax the boundaries and reassign some unlabelled data to an adjacent category that is more appropriate. This can be used in hypertuning to optimize the performance of the classifier. We wrap all the mentioned steps into a pipeline and fit the estimator based on our X and y.

After fitting the model all the predicted values are labeled now.

Now we can plot the confusion matrix to evaluate the training accuracy. 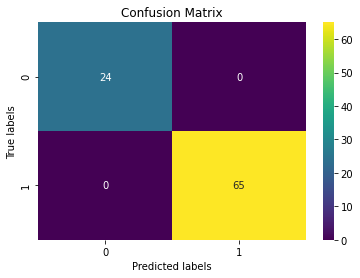 The classifier has not misclassified any of the labeled documents. It’s a good idea to examine the effect of clamping factor (alpha) in LabelSpreading to avoid overfitting. On another note, considering the small number of labeled data we did not split the data into training and validation set which would give us a way to evaluate the model. As an alternative approach we use GridSearchCV combined with a supervised classifier such as RandomForestClassifier and perform cross validation to get a validation accuracy score.

Here we get some misclassifications in the form of FN. 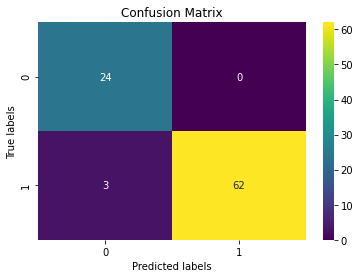 For the rest of this post we talk about how to create an endpoint for our machine learning model using a production-ready API such as FastAPI and deploy the model on AWS cloud. In general there are two different ways to use python web frameworks. We can use a full-stack web app with a user interface such as plotly dash that renders html or use a web/micro service as an API that its routes will return JSON data to the JavaScript app. This work utilizes the second approach to integrate the machine learning model with frontend web app. Our tech stack include three components:

We start by instantiating fastapi app and creating routes.

FastAPI is able to create documentation by creating a class Data which inherits from pydantic.BaseModel. In this class, we provide information about the features we are using to generate the prediction.

The most important step in creating endpoint is handling GET or POST request. For the prediction route we are accessing the API by using a POST request.

The portability aspect in containers enables easy and quick deployment to multiple hardware platforms and operating systems. To achieve this we will be using docker. To set up docker follow the instructions here.

To recreate this work, clone the repository into your local machine. $ git clone https://github.com/skhabiri/Bridges2Prosperity-ML-FastAPI.git

80:8000 on the last line connects host port 80 (the default port for HTTP) to container port 8000 (where the app is running). Commit your work by git add --all and git commit -m "Your commit message". Then launch the web service in docker container locally with docker-compose up. Entering http://0.0.0.0:80 in web browser should launch the API locally. 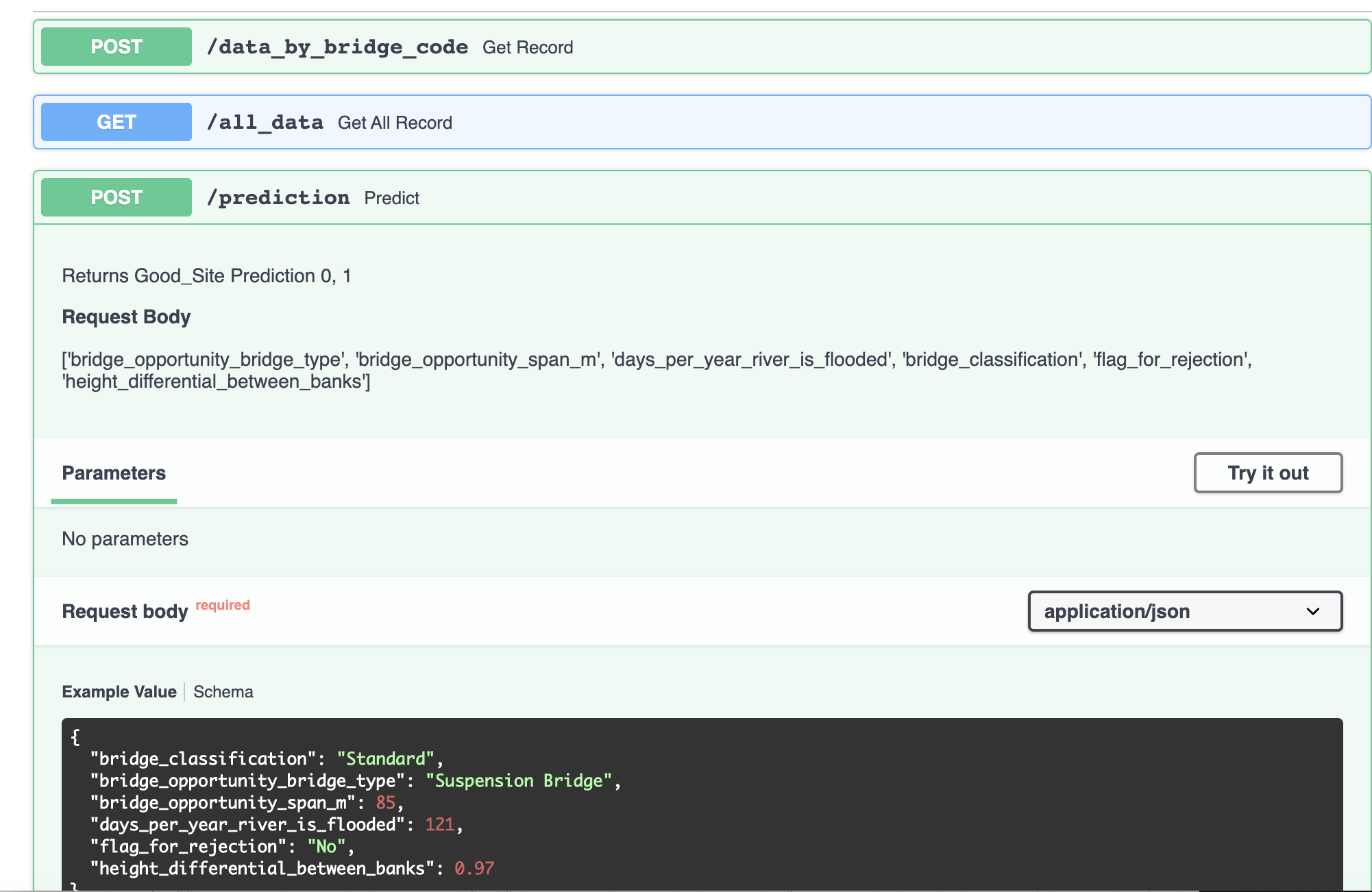 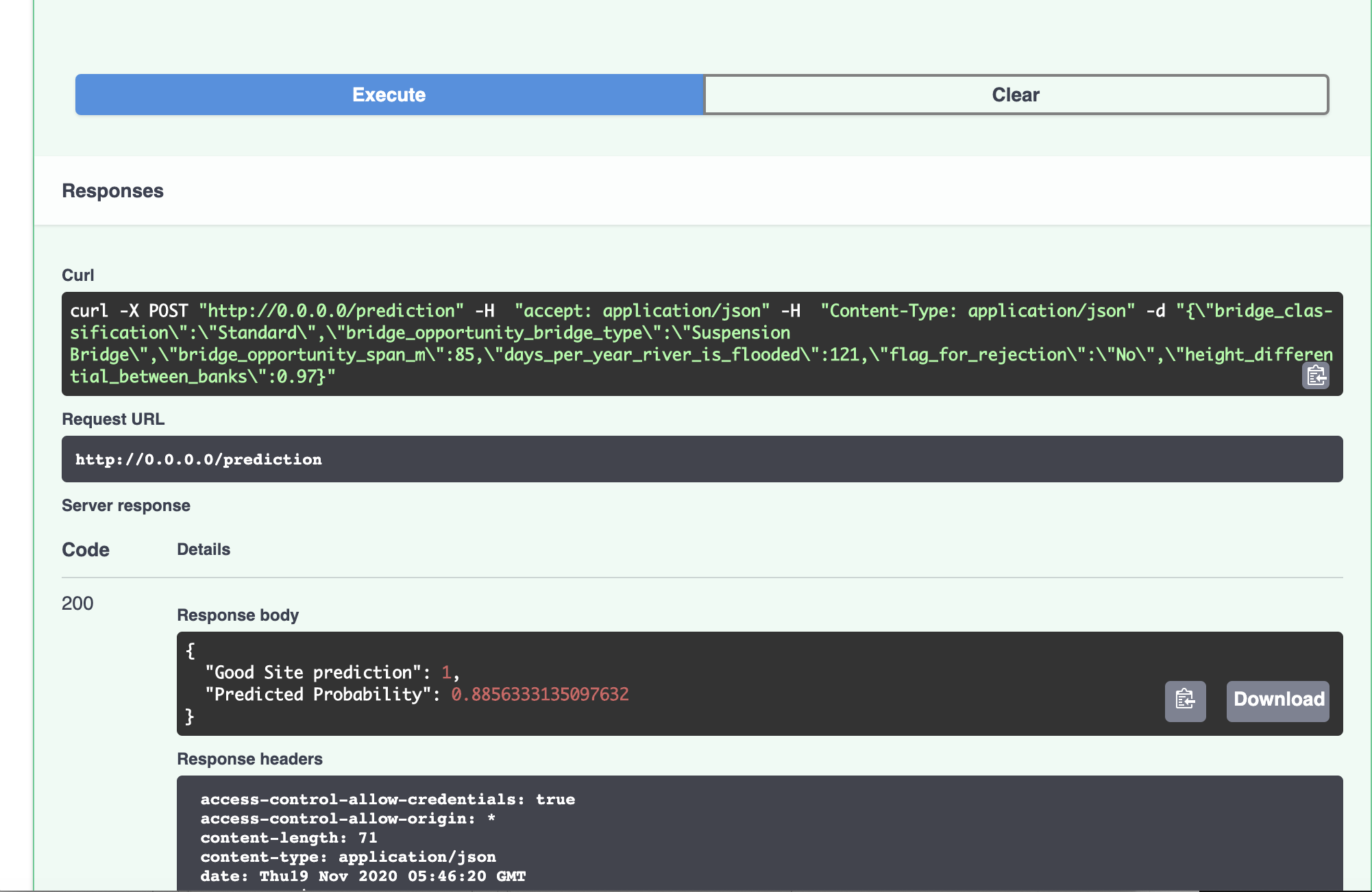 After commiting the changes, use these EB CLI (Elastic Beanstalk command line interface) commands to deploy the app.

For subsequent redeployment, we won’t need to initialize and create the app anymore.

When the application is deployed to Elastic Beanstalk, we’ll get an automatically generated URL that can be used to connect to the API. Route 53 is Amazon’s Domain Name System (DNS) web service. Follow the instructions to configure a domain name with [HTTPS] for our data science API (https://console.aws.amazon.com/route53/).

The way it works is, When a machine (or human) wants to connect to the API, they first need to find the IP address of the endpoint where the API is hosted. This is step one, where the caller (aka client) asks the name servers in the hosted zone to translate the domain name (e.g. b2p.skhabiri.com) to a proper IP address. Once the client has the IP address, it will connect to the API, which is hosted in the Elastic Beanstalk environment. We’ll make this connection secure by adding an SSL certificate to the load balancer and enabling HTTPS. The client will then send encrypted traffic over the internet to your API. Then, the load balancer sends the traffic to your actual API instances, running on servers or in containers. Since your load balance and application instances are on the same private network (not on the internet) we don’t need to keep the traffic encrypted, which adds cost and reduces performance. The traffic is decrypted by the load-balancer and sent to your application as unencrypted HTTP traffic on port 80. 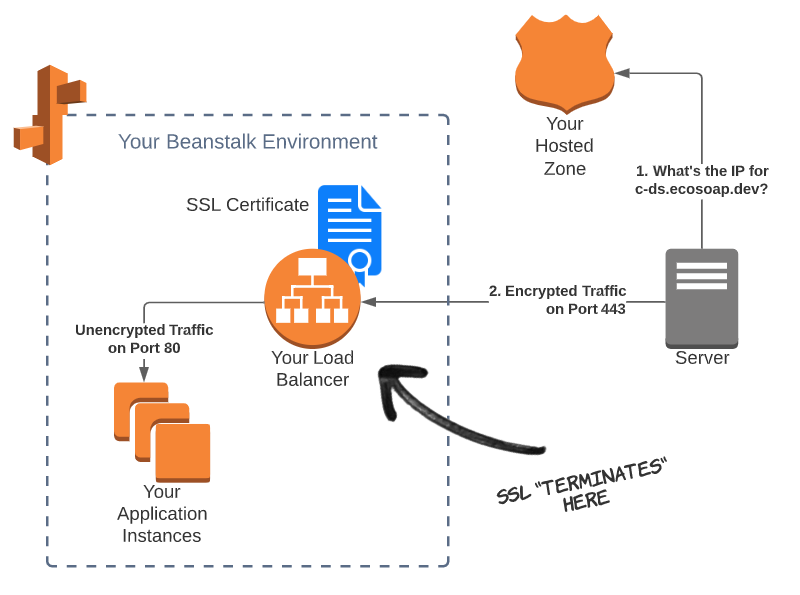 In order to have access to the dataset while connecting to data science API, We create a PostgreSQL database instance in Amazon RDS. Here you can find instruction for creating a PostgreSQL DB Instance. After DB instance is created, you can use any standard SQL client application such as pgAdmin to connect to the database instance. We can download and use pgAdmin without having a local instance of PostgreSQL on our client computer. Using the database client we create a database in RDS cloud and connect to it from client computer through psycopg2 a python library for PostgreSQL.

Here is a snippet of the code in Jupyter Notebook.

Let’s make a query to validate the data in the created tables.

An overall architecture of this work is presented in the following diagram. The deployed app is available here 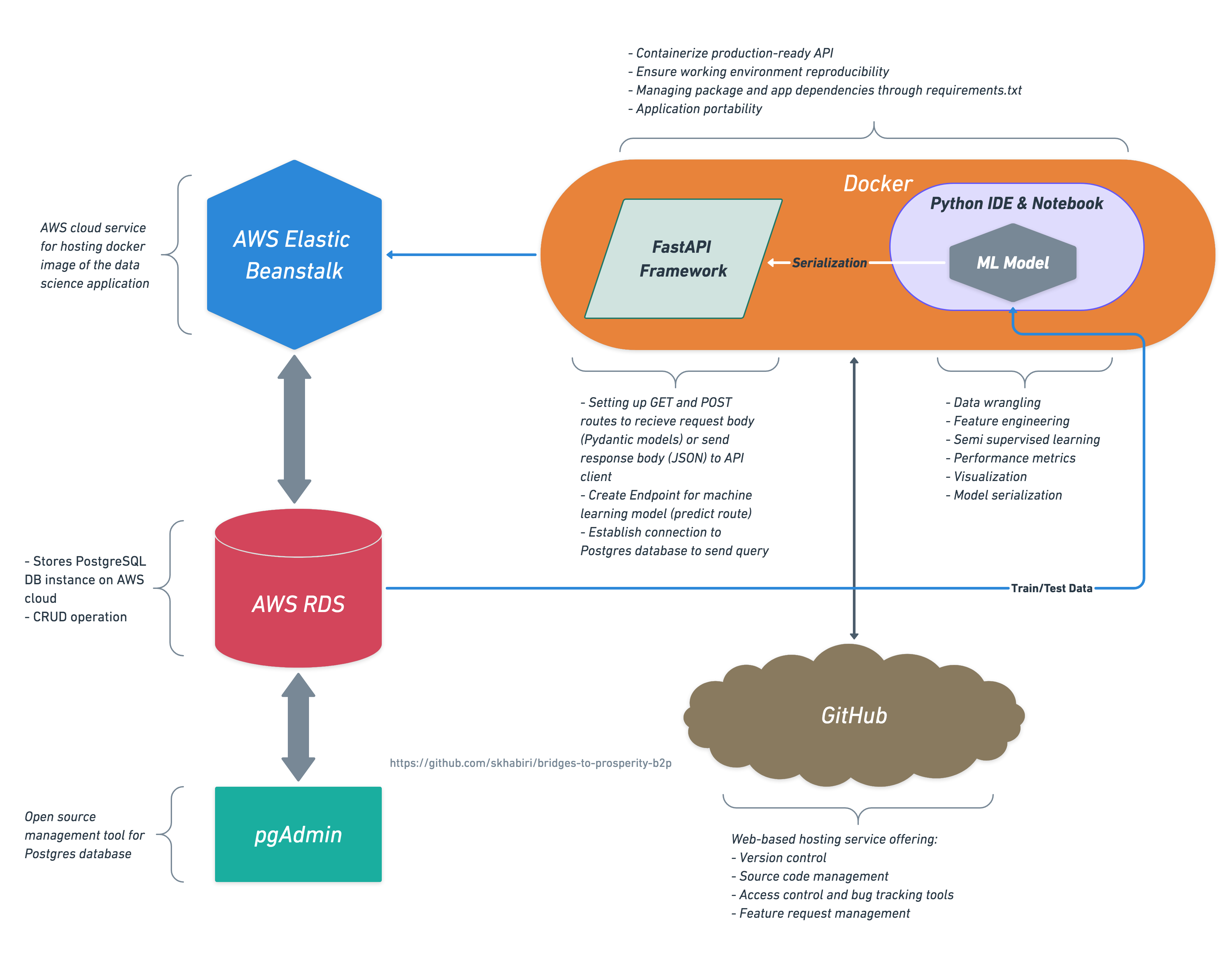 This work applied semi supervised learning techniques to create a predictive model for classification of an unbalanced dataset. We used SMOTE and LabelSpreading to generate synthetic data and construct similarity graph over all items in the input dataset. We also used cross validation as a way to evaluate the model performance in the absence of enough training data. The second part of the work explains in detail the deployment of the machine learning model on AWS elastic beanstalk using FastAPI framework.